Joseph Tyrrell has been variously described as the doyen of Canadian mining men, the dean of mining, the man who conquered the Canadian North, Canada’s senior geologist, and the last of the great breed of map­making explorers and first of the modern mineral­-finders and technologists. His life spanned the 19th and 20th centuries and embodies the romantic adventures of the former, and the industrial developments of the latter.

Not as well known is his connection to masonry and The Builders’ Lodge. Bro. Tyrrell was in fact a member of our lodge, many years ago. He remained active in masonry throughout his life even though his career took him around the country.

He, along with Brethren of Ivanhoe Lodge No. 142, convened the first Masonic Lodge meeting ever held north of the Arctic Circle in Canada, at Coppermine, 67°48’ North Latitude, 115°15’ West Longitude. Emil John Wali, manager of Eldorado Gold Mines, was initiated by a multi-Lodge team including Bro. J.B. Tyrrell as Chaplain. When Bro. Tyrrell moved to Toronto, he affiliated with University Lodge No. 496 GRC.

Another member of our lodge, R.W. Bro. Gordon Gross, an excellent mason and internationally recognized geologist in his own right (previously profiled) actually met Bro. Tyrrell early on in Gordon’s career, both having worked at the Geological Survey of Canada. 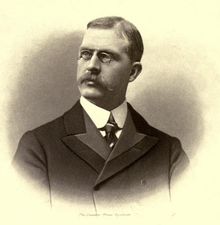 A man of discovery

During his years with the Geological Survey of Canada (GSC), from 1881 to 1898, Joseph Tyrrell explored and accurately mapped vast areas of western and northern Canada. He found important coal and oil deposits in Alberta, and made scientific history when he discovered the first dinosaur bones in North America. He later went on to work as a mining engineer and consultant.

Joseph was born in Weston, Ontario, on November 1, 1858. As a child, he developed scarlet fever, which left him with a permanent hearing impairment. But that didn’t stop him from pursuing higher education. He went to Upper Canada College, and then graduated from the University of Toronto with a law degree. But, after articling for a law firm in Toronto, his health failed and his doctor advised him to work outdoors. He was hired as a clerk by the GSC in 1881, and spent his first year cataloguing fossils and rocks.

Exploring the west and the past

In 1883, Joseph assisted George Dawson on an expedition to explore and map Crowsnest Pass, the north and south Kootenay rivers, Kicking Horse Pass and the foothills east of the Rocky Mountains. In addition to collecting plants, flowers and fossils, he was also assigned the task of making a “pace survey” – measuring by foot the distance traveled.

The following summer, in 1884, Joseph led an expedition to study the geology of the district north of Calgary, between the Bow and Saskatchewan rivers. While climbing up the bank of a creek in the Red Deer Valley, he came face to face with a dinosaur skull – the remarkable first discovery of carnivorous dinosaur bones in North America. The area proved to be rich in fossil remains. When Alberta became a province in 1905, Joseph’s “dinosaur” was named Albertosaurus.

Several days after unearthing the dinosaur bones, Joseph made a second important discovery near Drumheller – the largest seam of bituminous coal in Canada.

While exploring the unmapped area from the Churchill River to Lake Athabaska, in 1892, Joseph’s First Nations guides told him about a great river flowing through the Barren Lands to Hudson Bay. The next summer, he led an expedition to explore the river. Over eight months, the expedition covered 5,150 kilometres by canoe and on foot; more than half that distance had not yet been surveyed. Joseph’s expedition gathered the first accurate information on the region’s geography and geology, and as a result the Dubawnt-Thelon river routes were added to the map of Canada.

Joseph went to the Yukon in 1898 to assess gold-mining operations. The Klondike gold rush was at its peak, and at Big Skookum Creek he watched a prospector sift six pans of gravel, which contained $100,000 worth of gold. He reported that the discovery of gold in the Yukon was indeed significant.

When Joseph returned south, he re-evaluated his situation. His discovery of dinosaur bones and his major surveying expeditions had brought him fame but, unfortunately, not the financial remuneration from the GSC he thought he deserved. He was now a 40-year-old family man, and was still earning a clerk’s annual wage of $1,800. He resigned and traveled north to Dawson City to work as a mining consultant.

By 1906, the boom was over. Joseph moved his family to Toronto where he set up a geological consulting business. His reputation as an explorer and his work in the Klondike helped launch his career. Between 1910 and 1924, he served as resident agent for a British mining company.

In 1924, when the owners of the Kirkland Lake gold mine ran out of funds in their search for gold, Joseph lent them money to continue. They dug deeper, struck gold and by 1960, the mine had yielded $40 million worth of gold. Joseph retired as general manager of Kirkland Lake Gold Mining Company at age 69, but continued as president until 1955.

Celebrating a century of contribution

In his 70s, Joseph purchased a farm north of Toronto and began a profitable apple orchard. The retired geologist continued to write scientific literature, and edit the journal of explorer David Thompson, whose works he had read prior to his own expeditions.

Joseph died in August 1957, a few months short of his 99th birthday.

In 1985, the Royal Tyrrell Museum of Paleontology in Drumheller, Alberta opened, named in his honour.

· 1881 – Joined the Geological Survey of Canada
· 1884 – Discovered dinosaur bones and coal in Alberta
· 1893 – Explored Barren Lands, Dubawnt-Thelon River systems
· 1896 – Received the Back Award from the Royal Geographic Society of England
· 1897 – Presented a universally-accepted theory on glaciation, suggesting the ice age was not a single iceberg mass
· 1916 – Awarded the Murchison Medal in recognition of his work on glaciation
· 1930 – Received honorary degree of Doctor of Laws from University of Toronto
· 1933 – Awarded the Flavelle Gold Medal from the Royal Society of Canada
· 1947 – Awarded the Royal Geographic Society of England lifetime achievement Wallaston Medal

Len Potechin is an active member of the Ottawa community.  He has been setting an example for how a leading member of the business community can and should contribute to the community.  Len started a real estate company 50 years ago which has grown over the years to be a landmark in the region.  Since then he has had numerous business interests, including a golf course.
For much of his career he has been a leader and has held numerous association positions and received many awards.  Len has served in senior positions such as Chairman of the Ottawa-Carleton Board of Trade (now Chamber of Commerce) and Chairman of Ottawa-Carleton Economic Development Corporation (OCEDCO).  This leadership has led to numerous awards for Len including: